One of our senior web developers, Mike Klostermeyer, has the misfortune to live next to neighbors who make Clark Griswald look like a piker. In fact, 2 brother-in-laws living next to each seem to be trying to outdo each other. They are the Hansen's and the Honeycutts. Rumor has it that you can only approach the neighborhood wearing special sun glasses. 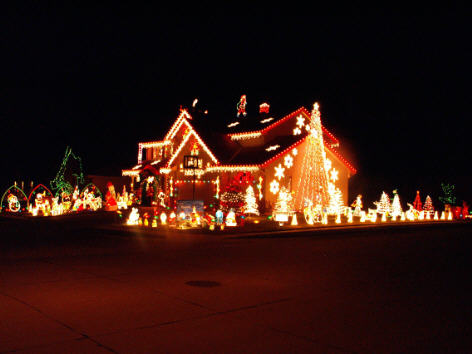 Next Door at the Honeycutts 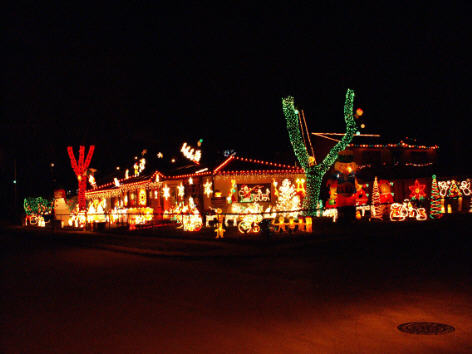 Of course all this Christmas camp comes with synchronized music. Check out the whole story and see the videos if you like at their Holiday Website. If any of you want some extra press for your design skills you might want to volunteer to help them out... on the web site I mean :)

In my computer lives a subtle and slightly demented gnome who's job it is to futz with my spelling. He's in charge of spell check and he delights in making decent sentences seem like they come from the mad-lib hall of fame. Today, while writing my "Thanksgiving Day" post I was talking about how I love the holidays and how my house is filled with the "smell of nutmeg and cinnamon". When I ran it through spell-check I found I had misspelled "cinnamon" (as I usually do). I chose the default without looking and then saved my changes and previewed the result. Imagine my surprise when I discovered that my house is filled with the smell of nutmeg and Chinamen. I definitely need to take a break. Maybe I'll go for a wok.

I don't usually favor chain blogging, but I thought this was worth repeating. I was reading a post by Coldfusion legend Ben Forta that he wrote on Oct 12th - immediately after sys-con published their now infamous Coldfusion demise article. Ben (as always) was succinct and took exactly the right tone in my opinion. It was while reading the comments however, that I stumbled onto a comeback that makes my top 10 list for funniest flames. Model-glue guru Joe Rinehart quoted the infinite monkey theorem:

Thanks Joe. That was precious. It's the one deceased that really had me cackling. I'll put that one in my quip arsenal.

You might know that I'm a long time Cubs Fan. Those of you who suffered with me during the White Sox championship season may remember this post of grudgingly offered congratulations. Like most Midwesterners I'm also not a Yankee fan. Actually, given the choice between meeting a Yankee and sleeping with a water buffalo - I'm taking the buffalo. It's not that some of the players on the Yankees don't garner my admiration. I think Arod had one of the best months of April I've ever seen - a fact that ESPN would not let us forget for more than 2 minutes.

In any case, I learned a couple of days ago that the Yanks fired "strength coach" Marty Miller. He was in charge of conditioning, but he was apparently working for the Red Sox because the Yankees can't seem to tie a shoe without throwing a hammy or breaking a collar bone. Anyway, I found it interesting that the strength coach's actual title in the organization is the "Director of Player Enhancement" - an acronym that spells "DOPE". Here is the story that I wish I had seen on the wire...

I'm the only one who made it into work this morning. That gas guzzling 4 wheel drive I usually complain about does a great job of mashing through the snow drifts to carry me the 18 miles of my commute. In case you are interested - here is the reason that all the other CF Webtools developers did not make it to work today (them and their pansy cars and mini-vans ... humpht). 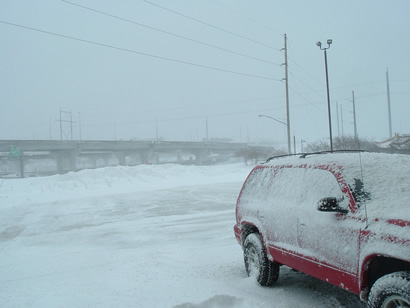 Coldfusion Sloggers of the World Unite!

We are often called upon to fix or upgrade applications for our clients. In that capacity we have had the fortunate (or often unfortunate) task of reviewing code that has been written by others. Of course this gives us CF Webtools developers things to talk about around the water cooler - "Hey... did you see that loop? What a piece of work eh?" (followed by raucous laughter). Hopefully we are not referring to our own code at the time. Anyway, these applications are often written by bright individuals with little or no experience in Coldfusion. Coldfusion is accessible in a way that makes it possible for someone to churn out a site or application if they just start at the beginning and keep "slogging away" till things seem to work. Of course, after the applications is under load or the data set grows or the technology changes you have to call in the big guns (that's where we come in). Still, the sloggers produce a great deal of the Coldfusion code in the world (perhaps contributing to Coldfusion's unwarranted reputation as being too "light weight" for serious applications). Here are some of the sloggers we've run into.

Escaping the Tyranny of the Holidays

We sure do a lot of “holiday” things around this time of year. We shop for gifts, decorate our houses and offices, take gifts back for other gifts, re-gift gifts from last year, make candy and treats, write Christmas lists, juggle amazing schedules and frenetically drive ourselves to the brink of nervous exhaustion. In our family we celebrate Christmas and over the years I have found myself trying to create the perfect Christmas - which really means trying to make Christmas into what I think it aught to be. Is there a secret to escaping the tyranny of Christmas expectations?

Fox News and the irony of "Bad Programming"

A friend of mine who has been the victim of several web browser hijacks was complaining of once again having a problem with being hijacked. I suggested a few remedies and thought nothing of it - but he returned with some new information. All of his sites were working correctly with the exception of one sit - foxnews.com. I went to foxnews.com and received an immediate JS error. After clicking to close the error my browser was redirected to a generic search engine page. It seems that some spurious code has crept into the foxnews.com home page. If I were them, I'd launch an investigation of CNN's IT department immediately :)